Get a 5-minute rundown on what’s happening in commercial real estate here. This latest edition of Workplace Bytes is full of information and links on data and trends in CRE, occupancy, and the return to the office movement.

As companies continue to pursue the best ways to drive teamwork and productivity with their back-to-the-office programs, we’re learning more about how to make a return more appealing. A recent Gensler survey says the top reason why workers want to spend more time in the office is to focus on their work better.

Further, the survey reveals “workers at the most innovative companies desire to work at the office more than average — back to the 67% level we measured pre-pandemic.”

Not surprisingly, workers rate in-office time as advantageous for working with others, learning, and socializing.

Another interesting finding: hybrid workers are likely to want another day in the office per week or month versus their current RTO schedules.

The latest survey research from WFH suggests that information worker time is about evenly split – roughly half remote and half in the office. Figures for at-home work are a bit lower for Finance, Professional, and Business Services, with in-office time higher. 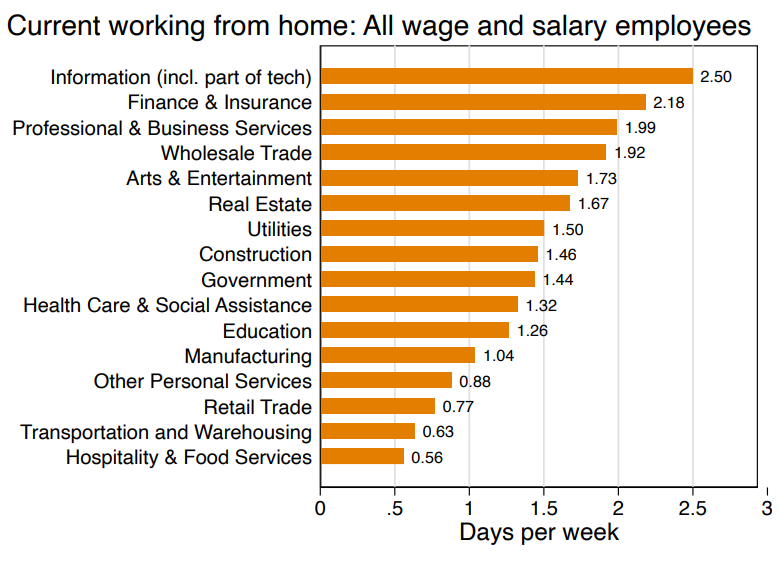 The research also reports that among full-time workers with at least a 4-year college degree, more than 80% spend at least part of their time in the office:

As we’ve reported previously, office occupancy rates vary significantly by market, with some of the highest rates in the UK. Flexible office companies are leading the way in occupancy in Britain. According to CityAM,

A majority (86 percent) of the world’s top 30 flexible workspace providers have now seen occupancy rates in their central London offices surpass levels of 60 percent, a survey by Knight Frank shows. A further 88 percent of the top 30 flexible office companies – including WeWork, The Office Group, and IWG – said they are now planning to expand their office footprint, by adding new sites.

Australia is seeing high and growing occupancy rates, according to the Property Council of Australia. The organization reports major city CRE occupancy rates for November ranging from 57-80%. Occupancy on individual days per week varies considerably, indicating that many offices are returning with a hybrid model.

These figures likely overstate occupancy – self-reported survey data typically overestimate in-office time. Across our Australian footprint, our most recent research showed occupancy in the 25-35% range.  But what’s perhaps most interesting is the overall trend. According to the PCA,  occupancy rates in these cities jumped about 12% month-over-month.

The Right – And Wrong – Ways to Manage RTO

As we all know, employee reaction to RTO policies is mixed. While some workers embrace return, others are quite vocal about their distaste. Glassdoor Data Scientist Richard Johnson wrote that RTO terms were up significantly on the company workplace rating site, often in a negative light.

“…employees, who often turn to Glassdoor to shed light on the not-so-great happenings behind company walls, are not necessarily on board with executive desires to have things return to pre-pandemic business as usual. The tension between employees and employers around the topic of RTO seems to be what led to the uptick in mentions of the term. The tug-of-war between employees wanting to stay remote and employers wanting them back in the office resulted in the share of employee reviews discussing their company’s RTO policy doubling since 2021 (+122 percent).

According to the WFH surveys, the most likely consequence of staying at home on work-in-office days, according to workers, is nothing. This is very different from the assessment made by their managers, who claim that a threat of dismissal is the most common outcome.

That’s a signfiicant disparity, and a reminder that surveys are less precise than data like that from occupancy sensors. But whichever group is more accurate here, it’s apparent that focusing on negative outcomes alone is not an effective way to create workplace productivity and harmony.

A thought-provoking article in Entrepreneur reviews the “Four Horsemen ” issues that must be addressed for long-term success with RTO: resistance, attrition, quiet quitting, and diversity. While the first three receive a great deal of press and other attention, the fourth is an area the article suggests needs significant additional focus.

The final of the Four Horsemen relates to the serious loss of diversity associated with the mandated office return. A Future Forum survey found that 21% of all white knowledge workers wanted a return to full-time in-office work, but only 3% of all Black knowledge workers wanted the same. That’s a huge difference. Another Future Forum survey found that 38% of Black men wanted a fully flexible schedule, but only 26% of white men felt the same.

The Society for Human Resource Management found that half of all Black office workers wanted to work from home permanently, while only 39% of white workers did so. Why do we see this difference? It’s because Black professionals still suffer from discrimination and microaggressions in the office, and are less vulnerable to harassment in remote work. Similar findings apply to other underrepresented groups.

Finally, this interview with ZoomInfo’s CHRO discusses how they leveraged listening sessions and empowered teams to set their in-office days as effective ways to help ease the transition for skeptical employees. Worth a read.

Several reports last month showed that companies’ commitment to sustainability is driving a boom in “green” building occupancy rates.  According to this piece from JLL, “Up to one-third of corporate real estate leaders in Asia Pacific are planning to exit carbon-inefficient buildings by 2025 as sustainability becomes an increasingly decisive factor in leasing criteria, according to JLL’s research on green premiums.”

JLL also reported that Australian and Asian commercial real estate markets lead in sustainability, but North America saw the largest improvement in 2022. From the piece:

“As more real estate owners report sustainability performance, one region is outshining the rest of the world in terms of investor action on environmental, social and governance (ESG) issues. Oceania, led by Australia in size and population, has achieved an average score across its real estate companies of 81 – compared to the global average of 74 – in the annual Global Real Estate Sustainability Benchmark results. Oceania has held the top position since the initiative started in 2009. … Asia follows closely with an average score of 78 – up three points from last year – while Europe is in third spot with an average score of 73 – up by two points from last year. … And the Americas recorded its largest leap in participation, with 30% year-on-year growth – a result put down to it being a larger market with inherently more growth opportunities.

At XY Sense, we saw a marked uptick in interest in, and commitment to, green workplaces throughout 2022.  One of the top reasons why companies choose our solutions over those of other companies is because they provide strong “green” advantages. These include the need for fewer sensors because of more extensive sensor coverage (~1000 SF versus ~500 SF), more efficient installation, reduced wiring needs via the SenseLink™ installation model, and the elimination of e-waste versus battery-operated offerings.

December was a busy month for the XY Sense team:

We’re constantly enhancing the XY Sense platform to improve accuracy and make it even easier for clients to derive maximum value from the solution. Here are two of our latest upgrades:

One big advantage for XY Sense is our ability to dramatically lower installation costs. Read about our exclusive Senselink installation methodology and how it recently saved a large international client $12M.

Our win of the CBRE Innovation of the Year Award continues to garner strong industry interest. The company’s winning entry emphasized the five key XY Sense differentiators that have made it the vendor of choice for many leading enterprise companies:

Read CBRE’s release about the award.

We hope you found this edition of Workplace Bytes valuable. If you have a comment or want more information on our sensors and platform, get in touch.

ESG the Focus of Sunrise Event Session on Uncommon Impact

Winning strategies to return to the office

Get a framework for planning, executing, and optimizing back-to-the office initiatives for better results.

Join Us – register now
We use cookies on our website to give you the most relevant experience by remembering your preferences and repeat visits. By clicking “Accept All”, you consent to the use of ALL the cookies. However, you may visit "Cookie Settings" to provide a controlled consent. View can view our Cookie Policy here.
Cookie Settings Accept All Reject All
Manage consent